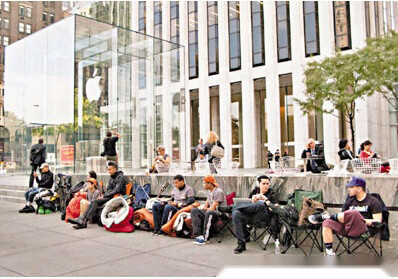 Customers in Australia, Japan and Hong Kong began snapping up Apple Inc.'s (AAPL) iPhone 5 amid signs of strong demand for the high-profile handset, despite a widening controversy over its mapping features.

The action began in Australia, first on Apple's schedule for kicking off sales in stores at 8 a.m. local time Friday. Hundreds of people turned out in Sydney, some waiting as long as 68 hours for the newest version of the popular Apple smartphone.

Lines at the signature store in Sydney's Central Business District stretched around the corner as consumers rushed to buy the phone. Enthusiasm was so high in Australia that online betting site was taking bets for how long the line in Sydney would be and what would be the most popular apps downloaded.

Todd Foot, representative of , claimed to be the first person in the world to purchase an iPhone 5 Friday morning, after waiting in line since Tuesday. He said he had already detected flaws with mapping features in the iOS 6 mobile operating system that comes with the phone.

'Apparently it's not 100% accurate, in fact the shop across the road here is the Darrell Lea store and that's actually listed as the Apple store at the moment, through their own maps software, so it's a bit of a joke going around,' Mr. Foot said.

In Japan, the second market where the iPhone 5 went on sale, avid Apple fans-some in homemade gear such as sandwich boards fashioned to look like iPhones-also eagerly welcomed the new product.

About 750 people lined up outside Apple store in Tokyo's posh Ginza neighborhood as of ten minutes before opening time, chanting with a revved-up fanfare. A few blocks away a digital countdown clock ticked outside a Softbank Corp. store where several hundred more iPhone fans had lined up.

Masayoshi Son, the founder and CEO of Softbank Corp. ()-one of two carriers that service Apple products in Japan-led a ceremonial cheer when the count reached zero and people could buy the slimmer, longer device.

'It's lighter than I thought it'd be and the screen is big. It's easy to hold,' said Mitsuya Hirosa, white iPhone in hand. The 37-year-old Tokyo resident was the first one in line outside the Apple store in Ginza. He had claimed his coveted sidewalk turf six days ago.

'To be the first person in line at an Apple store has a lot of meaning (as an Apple fan),' said Mr. Hirosa who works in mass communications. 'The iPhone is a part of my life. You never get tired of it even after using it for a long time, the design is good and it's easy to use.'

This will be his fourth iPhone model. Mr. Hirosa said he is most looking forward to using the new camera.

In Hong Kong, the scene was somewhat more subdued, with more than a dozen security guards helping to control more than a hundred excited people who gathered outside an Apple store inside a shopping mall in Hong Kong's International Finance Center building.

The orderly atmosphere also reflected the fact that the store made the iPhone 5 available only to people who had made online reservations-and prepared an airport check-in style waiting area for people in front of the entrance.

But the store didn't let people enter that area until a few minutes before the doors opened. The crowd stood patiently against the wall on the other side of the mall's walkway across from the Apple Store's entrance, while the security staff stood near them.

Most of the noise and fanfare came from the store's employees, all wearing blue T-shirts, who began chanting 'iPhone 5! IPhone 5!' before the doors opened. When the doors opened, security staff and store employees escorted the people who had made reservations, one by one, into the store.

Kevin Tse, a 26-year-old working for an advertising company, bought an iPhone 5 for himself and one for his girlfriend. Mr. Tse, who bought Samsung Electronics Co.'s (SSNHY, ) flagship Galaxy SIII model a few months ago, decided to buy the iPhone 5 because he was attracted by the major changes made to the new model, such as the longer screen.

He took out his Galaxy SIII from his pocket and said 'I will see which one is the better phone.'

After Asia, the action shifts to France, Germany and the U.K., finishing in the U.S. and Canada.

Apple's retail stores undoubtedly will have their own supply of the new devices, but what is unclear is how long they will be available. The original iPhone quickly sold out at many of Apple's retail stores, as did the original iPad. Over the years, each iteration has had initial supply shortages, but Apple usually has been able to catch up to demand in time for the holidays.

The iPhone 5's marquee features include a new display that measures four inches diagonally-compared with the 3.5-inch screen in earlier models-along with fourth-generation networking, known as LTE, a faster processor and updated operating system.

Customers who received the new software for older model iPhones and iPads on Wednesday began to complain about its new mapping application, which replaced Google Inc.'s (GOOG) software with Apple's own technology. Among the complaints customers posted to social networks like Twitter and Tumblr were that it no longer offered information about public transportation, something Google's mapping application did, and that some of Apple's maps were out of date.

An Apple spokewomans said Thursday that the software would get better as more people use it, adding that the company is working hard to make the customer experience 'even better.'